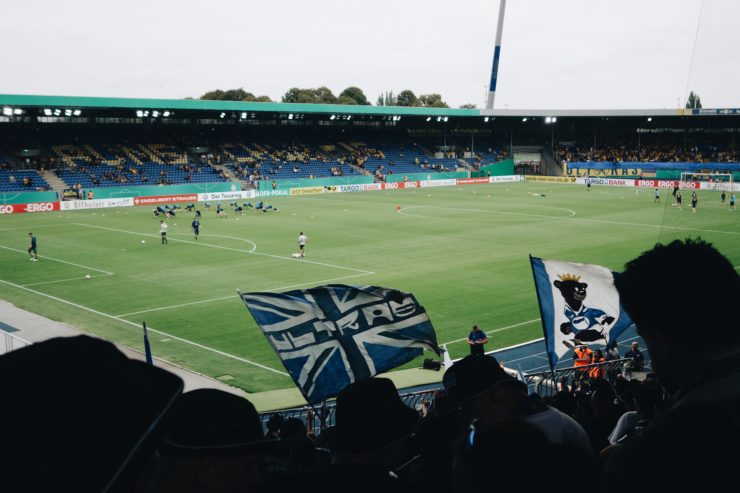 A very, very long time ago my football story began. It all started with my mother-in-law. She was born in Rostock in 1926 and came to Berlin to study at the Humboldt University. This was during the Berlin Airlift and she escaped East Germany by having a lift on one of the American planes flying out to the west for more supplies. She continued her studies in Heidelberg and eventually moved to London. She has always loved watching sport and as she lived between Chelsea and Fulham, each week she watched the team with the home game that week.

When my wife was a child, her mother encouraged her to watch football too and she became a Chelsea fan, often going to Stamford Bridge with her school friends to watch a match. Those were the early days of Ray Wilkins at Chelsea.

While I was growing up, my first love was rugby not football.  At first I just played it and then I went to watch international games at Twickenham and Cardiff Arms Park. Back then I was not so interested in football but how things have changed!

Over twelve years ago we came to Berlin on a city break and fell in love with the city. More importantly we went to our first Hertha game in the amazing Olympic Stadium. This was a turning point in our lives. We were hooked!

Every time we came to Berlin, we went to more Hertha games and for the last seven seasons we have had a season ticket. Through Twitter and Hertha we have made many wonderful friends both here in the city of Berlin and from other countries such as: Canada, Sweden and Ireland. We go to 15 out of 17 home matches every season. Usually we fly to Berlin from our home on the south coast of England to our “home” in Berlin (1146 km each way every trip!).

We are aware of the environmental consequences of so much travelling so over the last few years we have used carbon offsets through atmosfair.de to minimise the impact of our flights.  As we occationally drive to Berlin we have also bought a plug-in hybrid car which we charge off our solar panels when we are home.  Hopefully this all helps with our carbon footprint as we try to be responsible.

The coronavirus has made 2020 a difficult year for all football fans. We cannot go to games and meet with our friends but we still follow Hertha via the Internet and TV.

We are members of the Axel Kruse Jugend fan club and I do a English language podcast about Hertha with one of our German friends Jan  (Don’t Mention the Fussball). Interestingly he was also a latecomer to football through his wife.

We meet with our fan club members before and after the game at the “Axel Kruse Rondel” as we call it, to discuss the highs and lows of Hertha’s progress. Last season I had the privilege of accompanying some of them to Bilbao to watch my now beloved Hertha play in the Europa League. I also write a blog called “Fussball Musings”. Part of this includes a guide for first time visitors to the Olympic Stadium and encouraging them to go to watch Hertha.

So this is mine and my wife’s football story so far. We will still keep coming to watch Hertha through the highs and lows. When we can, we will keep meeting more wonderful and supportive Hertha fans.

Oh – and my mother-in-law – she is now 94, still lives in England and still watches Chelsea and Fulham. Now it is only on the television. But now she also watches Hertha, knowing that we are there sharing in her enthusiasm for football and clubs in blue and white!